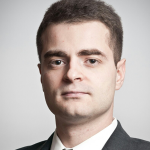 In a Slip Opinion released April 21, the Supreme Court of the United States addressed the question of whether police may extend the duration of an otherwise completed traffic stop in order to perform a dog search of the stopped vehicle.

The case involved a car observed by police to be slowly veering onto the shoulder of a highway. A police officer pulled over the vehicle, briefly questioned the driver, and then issued a warning. After the warning was issued, however, the officer did not release the driver. Instead, the officer retrieved his dog and performed an external sniff search. The dog alerted to drugs, and a further search led to the discovery of an illegal substance.

The Court held that “a police stop exceeding the time needed to handle the matter for which the stop was made violates the Constitution’s shield against unreasonable seizures.” Absent some other reasonable suspicion of wrong-doing, a police officer may only extend the duration of a traffic stop due to matters inherently tied to the purpose of the stop, such as checking the driver’s license, or inspecting the automobile’s proof of insurance. Once the matters linked to the stop are resolved, a driver must be permitted to leave.

It should be noted that the Court’s opinion does not invalidate all dog sniff searches of stopped cars. The opinion, rather, is narrowly limited to instances where there are insufficient facts supporting the suspicion that some other crime has occurred. The police officer in the case performed the search because he had a “hunch” that something improper was occurring, which alone was not enough to justify extending the stop. An officer may still likely extend a traffic stop if there are facts supporting a reasonable suspicion that other laws have been broken.

This article does not constitute legal advice, nor does it constitute the initiation of an attorney/client relationship. Please consult an attorney licensed in your jurisdiction for assistance applicable to your specific facts and circumstances.

The above article was written by Michael S. Divine, an attorney with Dudley and Smith, P.A. His main office is located in downtown Saint Paul, though he also has offices in Woodbury, Bloomington, Burnsville, Chanhassen, White Bear Lake, and Blaine.